Fran had recently been hired by an American manufacturing firm to help change the culture of the company. The firm wanted to foster a culture for its 12,000 employees that encouraged innovation. Fran had worked with the firm in the past and knew that previous initiatives had gone nowhere. She decided to take the job but was not confident that the outcome of this latest initiative would be any different. Noticing her lack of enthusiasm and energy, I asked her that if the “change fairy” happened to come along next week and bopped everyone there on the head with a change wand, what would be different? Besides the stated goal that people would start being innovative, what else would have changed?

One potential change, Fran responded, was that employees would be more willing to take risks because top management was backing them up and not punishing failure. There would be more trust and less guardedness around the pervasive fear of losing one’s job in uncertain economic times. But how could Fran be successful in a system that seemed to regard the change process as a ticket to be punched rather than the fragile key to the success? Given what she had to work with, where and how in the system could she intervene to have the greatest chance for achieving success? Representatives chosen by Fran included; the senior management team, the sponsor of the initiative, and the change team leading the new initiative.  Fran set up the representatives in the following arrangement: 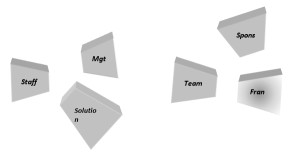 The representative for the change team reported they did not feel engaged in the project. The main goal was to stay employed and not rock the boat. The sponsor, who reported to the VP of HR, did not have much of a connection with the change team or senior management, but was hopeful Fran could make wonderful things happen which would make him look good. Senior management was a little uneasy at first with what the people behind him might be up to, but the staff did start feeling they could rely on the sponsor to keep things in control and avoid negative surprises.

A representative for the 12,000 employees was added. She did not feel a part of the change process and just wanted to know what was expected of her. The situation seemed stuck. Something was needed to move things forward but what? Another representative was added without her role being announced. She found her place beside company staff. She reported feeling very grounded and rooted as if her feet were filled with a warm energy that needed to be expressed. She felt very connected to the staff. I told the group this representative was the solution. No real progress could be expected without involving the firm’s employees. Still, senior management was not really paying much attention to the change initiative and the sponsor did not want to their attention. The change team was open to action as long as it wasn’t risky.

A representative was added as the part of the culture that somehow sustained the status quo. There was no movement. Something else was still needed. I put in another representative without saying who or what she was. “What happened when she entered the space?” I asked. Others noticed it felt best when she was near the center and visible to all. This person was the compelling reason for the change. People had to realize they could no longer “kick the can down the road.”  The new arrangement gave everyone a sense of hope and the status quo slowly withdrew from the center of the circle. Staff still wanted to know how the change was going to take place and their role in making it happen. The change team handed them a notebook that represented the plan, but this gesture was not convincing. The sponsor then took the plan from the change team and handed it to senior management who then handed it to the staff. 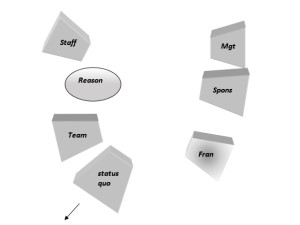 The constellation indicated the need for a visible and compelling purpose for change. Everyone might not buy in, but a well-crafted and communicated rationale would bring enough people onboard.  Senior management’s endorsement of the plan and their commitment to it was a vital part of this outreach. Fran left with the sense that she had a way forward. She now felt hopeful about the project and her capacity to make a difference. 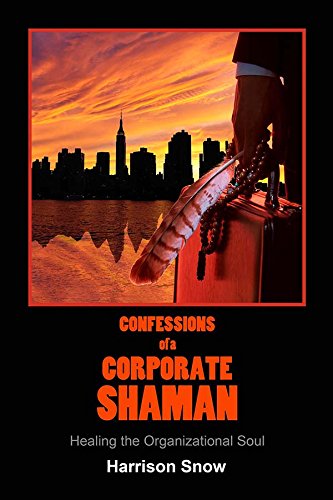